For many backpackers and travelers in Northern Thailand, a stop in Chiang Rai is often a brief one, either just a stop-over through to Chiang Mai or to see the famous White Temple. My goal is to convince you to skip the typical 1-day city hop and really explore this epic northern gem. A great start is checking out these 3 epic waterfalls near Chiang Rai!

What many people don’t know about Chiang Rai is that it’s a hotspot for jungle trekking and other epic outdoor scenic adventures. In fact, Chiang Rai has some of the best waterfalls in Thailand. You might be as surprised as I was to find a huge, 70m+ plunging waterfall at the end of epic jungle hiking trails just a short hop from the city.

Well, let’s get into it. Here is the first of these three epic waterfalls near Chiang Rai;

Located at the end of a scenic tea-plantation and rice-field lined road, Mae Sai Waterfall hosts not one, but two waterfalls each with swimming holes and even a sneaky waterfall cliff jump!

Getting here takes about 35 minutes from Chiang Rai by motorbike, and you will likely have this entire two-tiered waterfall to yourself! 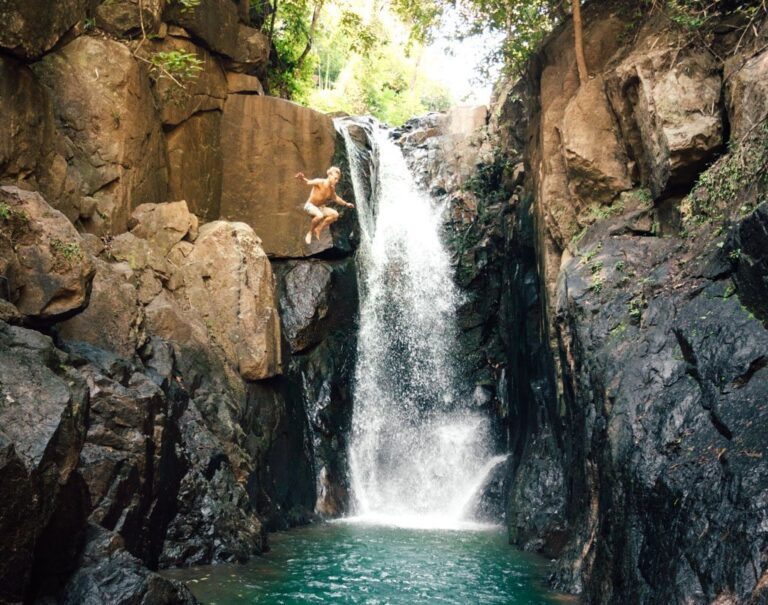 If you’re up for visiting two waterfalls near Chiang Rai in one day, then adding Huay Kaew waterfall to your itinerary works out well for a full-day trip.

This one is much less-known than the other Chiang Rai waterfalls, and only just recently opened up for tourism. Similar to Mae Sai waterfall, this one is relatively quiet all year round. The only people we met when we visited in peak season was a group who stopped here at the end of a two-day trekking and hill tribe trip.

Similarly again to Mae Sai, Huay Kaew has two primary levels. However, you won’t find a plunging waterfall here, more-so a larger, cascading flow at both levels. You can unwind and cool off by swimming at both locations, where a shallow freshwater pool waits at the base of both falls. There are also a few geothermal hot springs in the area, which is a worthwhile addition to your waterfall day trip.

The hike to Huay Kaew waterfall takes roughly 5 minutes for the lower level and 10 minutes to reach the top level. Just follow the path and you won’t miss it! 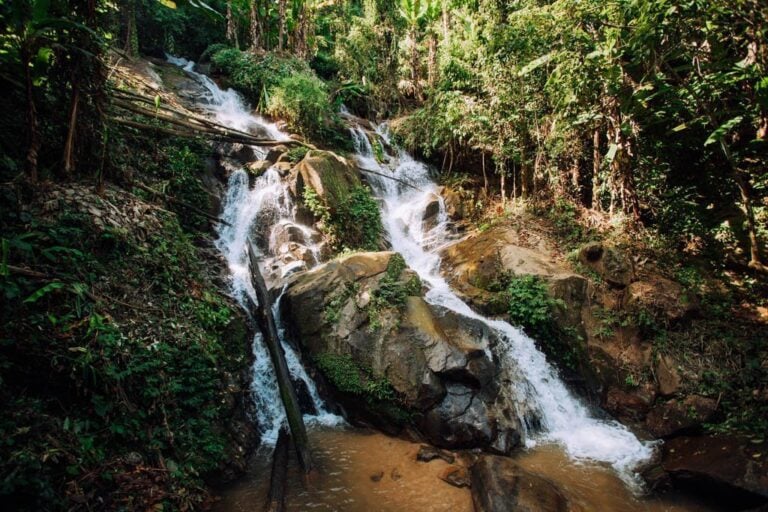 Some say it’s better to save the best ’til last! Visiting Khun Korn waterfall was the highlight of my trip to Chiang Rai, and in fact, was my favorite waterfall in Northern Thailand!

This one is a seriously impressive plunging waterfall that gushes down from over 70 meters in a beautiful jungle amphitheater oasis.

The short, but rewarding 3 kilometer round-trip hike to this Chiang Rai waterfall through banana fields and bamboo forests is also pretty magical in and of itself.

In my opinion, if you were to only visit one waterfall near Chiang Rai, make it Khun Korn Waterfall!

It’s no secret that Chiang Rai can get seriously hot! However, if you visit in the right season, you’ll find refreshing weather and flowing waterfalls.

The best time to visit Chiang Rai waterfalls is between October to February. This season is known as the cool season, with clear skies, occasional evening showers, and much more tolerable temperatures.

Although it’s considered the cool season, you can still expect temperatures in the low 30s!

August and September are considered the wettest months in Northern Thailand, so if you’re visiting the waterfalls near Chiang Rai during this time, be mindful of torrential flows!

Getting Around in Chiang Rai

Before you race off for your waterfall chasing trips, you might be wondering “how am I going to get there?” As I briefly touched on above, the best way to get to all of these waterfalls in Chiang Rai is to rent a motorbike and drive here yourself.

While you can take organized tours and pay private drivers, here are a few reasons why I think you should do it independently;

If you’re looking for a motorbike to rent, then I’d suggest either staying at, or contacting the owner of Grace Hostel. She is super friendly and offers great, competitive rates on Chiang Rai motorbike rentals.

Expect to pay around 150-250 baht per day depending on the season and type of bike.