Transferring money to Thailand from your home country, be it the US, Canada, Australia, or the UK, has been a pain point for just about every expat at one time or another. But we all have to do it.

The scale of it is huge.In 2017, over 5 Billion US Dollars in remittances were sent to Thailand, of which the US, Germany, Australia, UK, and Sweden were among the biggest senders.

You can bet your bottom dollar a huge amount of that was expats funding their Thai bank accounts, and of course sending money to Thai partners.

Look, we all know banks are a scam, but hiding your money under a mattress isn’t exactly a safe bet these days – not that it ever has been.

This sucks: because they have us like a puppet on a string; they are free to slap on big fees and unfair exchange rates when we want to transfer money.

When you sit back and think about it, it’s the strangest thing: You are charged to withdraw your own money!

Okay, so you are abroad, you expect to pay a small fee, but not for them to make a big profit out of it. And believe me, they do.

The 4 Pain Points of Transferring Money to Thailand

And we’re nowhere near done with fees yet. Read on.

After the transfer fee, you get hit by the receiving bank for another amount of about the same. Most Thai banks charge 500 Baht. So you’ve already paid twice to transfer your own money. And that’s without the currency conversion charge.

Out of the three fees, this is the evil one.

Most people presume you get the mid-market transfer rate. You know, the one you see on XE .com. But then you do the math and realise that you’ve been shortchanged, massively!

In the world’s currency markets, traders define the rates at which they are willing to “buy” or “sell” a specific currency. The mid-market rate is simply the midpoint between demand and supply for a currency, and because of that, it changes all the time.

But that’s as technical as you need to get. The most important thing to know is that the mid-market rate is considered the fairest exchange rate possible. The mid-market rate isn’t a secret either. Its the rate you will find on independent sources such as Google, XE and Yahoo Finance.

Unfortunately it’s not the rate they pass onto you. It’s one of the ways they can hide the true amount they’re charging. Most banks take the mid-market rate and apply a margin on top, without being transparent. So you have no idea how much they’re over charging you by.

By hiding the real charge in the exchange rate offered, most providers make huge profits at your expense, and you’re none the wiser. 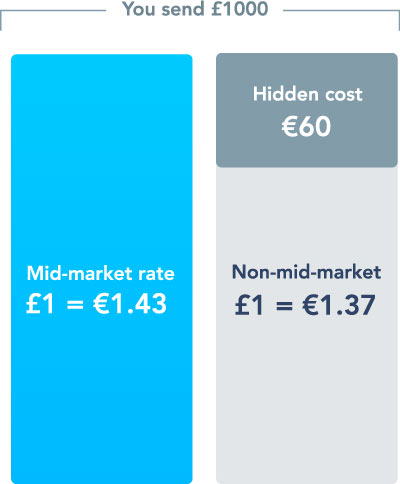 You can offset the loss slightly by choosing to send money in your home currency, but many people sending money to Thailand make the mistake of choosing to convert to Thai Baht at their source bank instead of at the Thai end.

This means you lose even more money, because your bank steals a nice chunk of cash on their own exchange rate, a rate they set themselves – not the “mid-market rate”.

That said, the Thai bank will still convert your currency to Thai Baht at their own rate too, and make a enough for a meal out. But they generally won’t squeeze your pockets as hard as your sending bank  (your home bank).

So, you’ve had your pockets skimmed on all fronts.

You paid two transfer fees, and a currency conversion charge.

But even after they’ve dipped their finger in your honeypot multiple times, the banks still can’t promise the money will be there within 48 hours. WTF?

Hell, sometimes it takes as long as 5-7 days!

Sending money to Thailand is expensive, but what other option do you have except the bank?

You could carry money through customs, but then how often do you fly home to be able to do that?

To be honest, I hate carrying a ton of money around with me. It’s just not safe.

Western Union is just silly expensive, and PayPal steals 3.5% on a transfer and charges up to 4% currency conversion fees. Yes, I said up to 4%! It’s 3% for the UK.

Well, as you probably guessed, the point of this post is to reveal that there is a solution. Thank Buddha!

TransferWise Will Save You Money

Seriously, I have waited years for this. I was so skeptical at first. I simply didn’t believe it was possible.

But hallelulya,  you can now transfer money to Thailand with ZERO bank charges, get the MID-MARKET RATE currency conversion and only pay a small fee.

I know, it’s hard to believe. But I’m doing it and so now are hundreds of my readers.

And here’s the proof:

But now look at the bank transfer rates of two high-street banks. TransferWise beats them both, comfortably. I dread to think what some of the others would be:

Now look at the market rate for the same time of day on XE.com.

So altogether, with the favourable exchange rate, I saved around £25 with TransferWise over transferring with my bank!

For my friends from the USA, here’s how things sized up in dollars:

Again, the TransferWise rate is better than the market rate below!

I was so over the moon with my transfer that I popped off an email to them and asked if I could get more information so I could blog here about it (see below on how it works).

Banks could charge you up to 5% in hidden costs when sending money to any bank account abroad. TransferWise is up to 8x cheaper. It’s only fair.

How Does TransferWise Make Sending Money to Thailand so Cheap?

Well, with backing from the likes of Richard Branson, I guess anything is possible. But actually, it’s quite genius.

Once you initiate the transfer, TransferWise searches for other people doing a transfer from the location you are sending to, and effectively swaps the currency.

Of course, money transfers being as frequent as they are, this means there’s usually several matchers available, making the process damn quick. My first one completed within 48 hours; 2-3 days quicker than my bank.

I’ve had readers email me and say they received their money to Thailand within 24 hours.

The process is completed by making several individual conversions using effective market exchange rates that work in your favour.

In other words, different parts of the transfer can be converted using different exchange rates.

Normally it takes a day or two to process conversions. For bigger amounts it could take longer.

TransferWise was founded on the principle that people deserve transparency, fairness and better value when it comes to their money. I think the large majority of us would agree with this principle and have waited a long time for a service like this.

Boy does it feel good to avoid those bank fees!